(Some information has been removed or is unspecified for identity security purposes.)

Certificate in Professional Coaching for Life and Work, 2014

University of the Pacific, McGeorge School of Law, Sacramento, California 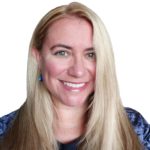